[Part 2]How AI can change your business: Three gaps to bridge 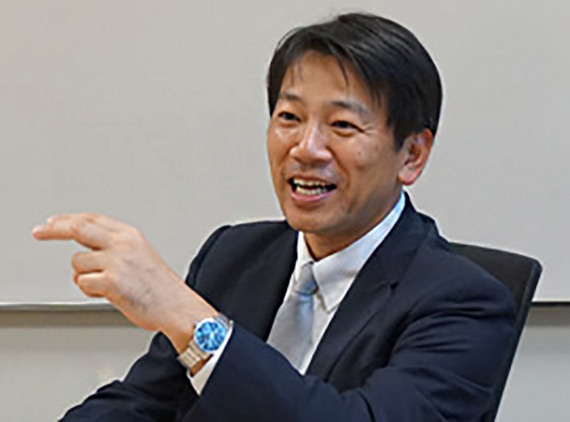 Dream Incubator President Takayoshi Yamakawa recently talked with Professor Vijay Kumar (Dean of the School of Engineering and Applied Science at the University of Pennsylvania), who explores ways of incorporating artificial intelligence (AI) and other advanced technologies into the business sphere, about the differences separating Japan and the United States.

Session 2: Bridging the gap between Japan and the United States (the international scene)

Yamakawa: For our second session, we’ll be focusing on things that Japanese companies need to understand when they collaborate with the “cutting edge”: new technologies and front-line human resources. Our first session on the gap between technology and management touched a little bit on the Pennovation Center, a facility that opened at the University of Pennsylvania—where Professor Kumar serves as Dean—in August. Bringing researchers, companies, and startups under one roof for joint research, development, and information exchange, the Pennovation Center is all about innovative collaboration. What sorts of companies visit and work at the Center, Professor Kumar?

Kumar: Technology-related companies are frequent visitors, of course. The interesting thing is that we also see plenty of companies at the Center that have nothing to do with robotics or AI—some of which have even signed up for spaces.

Yamakawa: What kinds of companies have reserved spots at the Center?

Kumar: One is Hershey, the big global chocolate manufacturer. They don’t have any links to robotics, but they come and visit us because they want to locate the next source of disruption and be around smart human resources. There’s also interest from Comcast, which is currently focused on content management and delivery to consumers via television sets, but very interested to explore the future of media communications, and learn about the latest technologies. We’ve also got a leading mutual fund. They know the financial industry is bound to see a disruption, so they want to understand the potential of robotics and AI and try to transfer some of that insight into their field of business. Yamakawa: You deal with companies that don’t have anything to do with robotics or AI? That’s surprising. What do they do when they come to the Center? What about when they visit your lab? On visits to labs and other facilities like that, people from Japanese companies typically just introduce themselves, take a look around at the technologies, ask a few questions, and then go home without making any concrete commitments to using the innovations in business applications.

Kumar: Between April and August, the Pennovation Center signed up 18 companies from around the world—not just the United States. Startups tend to move really quickly: they’ll take a tour of the Center one day, maybe sign up for a space that night, and even make the down payment the next morning.

Yamakawa: Essentially, you’ve got big corporations buying tickets for the frequent access to your lab, contact with other researchers, and discussions with all kinds of sharp-minded people. Besides the financial aspects of the operation, is there anything else that companies need to be aware of when they start dealing with the Pennovation Center? Kumar: The most important thing for a company to focus on is the nature of what they want to pursue at the Center—and that means having a sense of purpose. When you set up a space at the Center, you’re embedding yourself in an environment full of diverse companies, professors, and students in so many different fields. That exposure to new, wide-ranging information gives you a stronger sense of purpose to accomplish something and gets you and your group talking about what you need more of to get the job done. Once you’re to that point, you can start looking for the technologies that’ll lead you to your goal.

Getting that cycle going is like positioning yourself for new innovation. To do that, you need to work with people and groups from different perspectives. The Pennovation Center has always been about the idea of collaboration, so we’re always trying to foster synergies with Penn technologies.

Yamakawa: The cultural divide between Japan and the United States seems like it’d be a big obstacle to collaboration, though.

Kumar:I feel like Japanese students never challenge their professors or other higher-ups. When I say something to my students, I tell them there is a 50% probability I am wrong. It is their job to figure out when I am wrong and challenge me. Unless they have that responsibility, they will not learn to think on their own or challenge what they read or hear.

Yamakawa: Interesting. You have to make your opinions and insights heard if you want the collaboration to be fruitful.

Yamakawa: Japanese companies tend to be nervous about their technologies getting stolen. What would you tell Japanese businesses about keeping their intellectual property safe when they collaborate? How do groups at the Pennovation Center approach the issue?

Kumar: They’re obviously very serious about security. They draw clear lines between what they shar in shared spaces and what they keep in private spaces. In collaborative projects, there’s a defined separation between which parts are collaborative, which parts belong to the university, and which parts belong to one individual company. If you don’t protect intellectual property, I don’t think you can encourage commercialization.

Yamakawa: I totally agree. How do firms go about drawing the lines between separate, individual work and joint collaboration?

Kumar: Say that I’m from company A and you’re from company B. If we collaborate at the Pennovation Center, we agree that what you develop is owned by you, what I develop is owned by me, and what we develop together is owned by both of us—jointly owned. We also have a non-exclusive, non-patent license to the joint property; in other words, if you want to try our joint property out in your lab or factory, you have license to do that without asking me. That lowers the barrier to collaboration and lets us avoid wasting time drawing out complicated agreements.

Yamakawa: That makes sense—for a company, the key to collaboration is to take a positive approach and make your opinions heard but still operate within a set, defined disclosure framework.

Yamakawa: Based on what we’ve talked about so far, it sounds like Japanese companies might need some kind of go-between to link up with cutting-edge companies and universities in collaborative arrangements. How do Chinese companies make that connection? When Chinese companies want to work with the Massachusetts Institute of Technology (MIT), I’ve heard that they’ve had Chinese MIT students on campus help out with the negotiations.

Kumar: That’s true. The Chinese companies that have come over to the Pennovation Center were brought there by my former students, actually. Having that connection with students gives Chinese companies a good understanding of what we’re doing before they come in, which makes our conversations smoother and easier to get off the ground.

Yamakawa: A student go-between would definitely give the talks a good head start.

Kumar: You can’t overstate the importance of real networking. We have e-mail, SNS (social networking sites), and so many modes of exchanging information now, but there’s no better way of building relationships of trust than forging close, face-to-face connections. In creating close relationships, it’s also important to have more than just a “mediator”—you also need a “producer.”

In my dealings with the Japanese government and Japanese companies, Dream Incubator has played a really important role. When cultural differences come into play, it certainly helps to have people who understand both cultures—and the people at DI not only got what we were working on but also came from a trust-based network. I’m really glad I met the right people.

Yamakawa: Thanks for your kind words. How many post-doc or other Japanese students have graduated from your lab, by the way?

Kumar: None, unfortunately. Not one (laughs). Yamakawa: You see the same things happening at the top technical schools in the United States, too. Stanford and MIT are two prominent examples. Thirty years ago, there were legions of Japanese students in the engineering departments at US universities, but those numbers have dropped precipitously in recent years. Learning engineering abroad is important, of course, but the networking facet might even be more crucial: Going overseas would help Japan’s technological pioneers in their late 20s and 30s work themselves into a first-class international network. That would be a valuable asset, for sure.

It’s even more important that people and companies nurture their networks long enough—at least 10 or 20 years—for those links to become trusting connections. Otherwise, they’ll be constricting their pipelines for the future. Since time is obviously a part of the collaboration equation, age is another factor. What can you tell me about the demographics at the Pennovation Center? What kind of age groups do they come from?

Kumar: The people coming to the Pennovation Center are interested in working with us, and they tend to be on the younger side of the spectrum. Age doesn’t have much of a bearing on trying something new, I don’t think, but most of the startups at the Center are companies where almost everyone’s under the age of 35.

Yamakawa: While these people in their early thirties are building a strong, lasting community of cutting-edge progress abroad, it seems like Japan’s slipping out of the picture altogether.

Kumar: I think it’d be good for a group of Japanese companies to sponsor a program that sends personnel over to the United States. They could have the employees devote some of their time toward researching at US branch offices and spend the rest working on ideas at the Pennovation Center, for example. The employees could even take courses. If someone wants to get a degree, that’s fine. Whatever the employees do in the United States, they can take the fruits of their efforts back to Japan—and have a huge positive impact.